Celebrate 30 years of Care for the Carers

In 2019, Care for the Carers celebrated its 30th year and ran a variety of exciting events to celebrate carers and raise funds of the charity.

Formed in 1989, we support and represent unpaid carers across East Sussex, providing information and advice, support groups, counselling and offering social activities to help give carers a much-needed break.

Yvonne Wiggan is a carer in Eastbourne, and is one of the thousands of carers who has benefited from support from the charity over the years:

“Care for the Carers has always been there for me, whether it’s advice or support they have guided me through some very tricky times. They have made me realise the value of my caring role to my son. Care for the Carers has meant that I have someone to listen to my concerns and to guide me and not to be judgmental of me, though remaining professional at all times.”

Garnering some high profile backing over the years, our supporters include the HRH The Princess Royal, who recognised the vital role unpaid carers perform in society by opening the Eastbourne 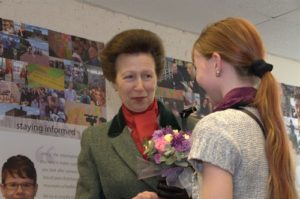 In 1999, then UK Prime Minister, Tony Blair, also provided his encouragement, writing at the time to Care for the Carers: “I know the very difficult and stressful work carers do, and this country owes them a great debt.”

To help celebrate our 30th anniversary, throughout 2019 Care for the Carers sold tickets for our Grand Raffle, including fantastic prizes from many local East Sussex businesses.

As the charity was founded in the 80’s, a major 80’s celebration was planned at Bexhill’s De La Warr Pavilion later in the year, and we are asked local people to support carers by holding their own 80’s-themed fundraising parties. You can still host your own 80’s party in aid of carers. Find out more.

Managers at the charity did their own individual challenges to help raise funds for carers, too. Jennifer Twist, Chief Executive Officer, cycled from Eastbourne to Paris, and Jo Egan walked the South Downs Way, with her family joining her for the hike.

Caroline Foord of local solicitors’ firm, Heringtons, will be ran the London Marathon in aid of Care for the Carers.

If you’d like to volunteer your support to the charity, find out more about volunteering with us.

Rise in carers in East Sussex

Currently around 10% of the population are carers, but East Sussex has experienced a 17% increase in number of carers over the past five years.2  There are an estimated 51 new carers every day in East Sussex.3

Jennifer Twist, Chief Executive Officer at Care for the Carers, says: “The number of unpaid carers in East Sussex has now grown from approximately 42,000 in 1989 4, to 66,472 today. These carers need your help.Many carers are not aware that they are entitled to support, and that help is out there. Looking after a loved one can be hugely isolating, and often takes its toll on your health, mental wellbeing, finances and relationships. No one should be left to care alone.

If you’re a carer in East Sussex, please get in contact, and if you’d like to support our work we’d also love to hear from you.Call 01323 738390 or email info@cftc.org.uk

2 Estimated total amount of unpaid carers in East Sussex in 2018 is 66,472. Figures calculated by Care for the Carers based on projected growth from 2011 UK census figures: