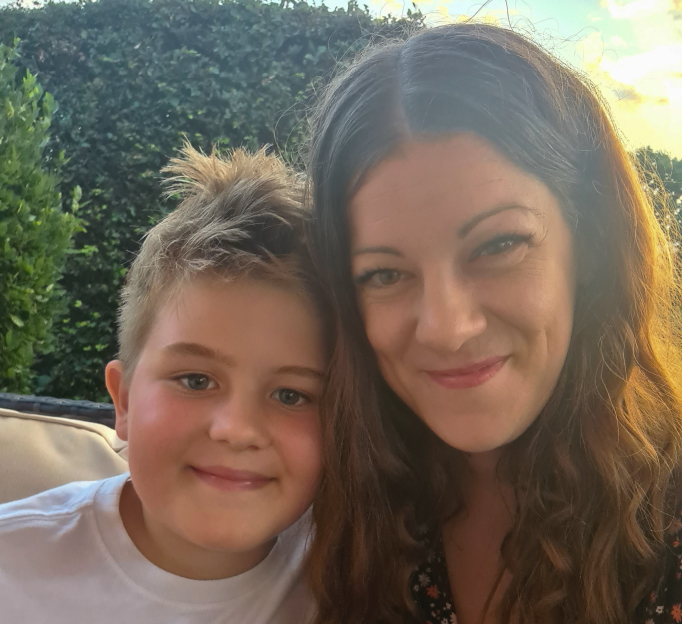 Oliver and Wendy. A young carer looks after his mum

Oliver is 11 years old, lives in Eastbourne and attends Gildredge House School. Oliver’s mum, Wendy, has a pacemaker and a mechanical heart valve and takes special medication for her condition.

Oliver saw his mum collapse and called an ambulance when he was 8 years old. He says: “I was shocked. I guess you don’t really cry because there’s not enough time to cry, and you’ve just got to be focused on the situation. And you feel bad afterwards; it’s just a shock. I wanted to go back to the hospital instead of somewhere else until Mum was well.

Since then, I have learned what to do. Me and my Mum watch YouTube videos and tutorials on how to do the recovery position. I practise and know how to do it. Sometimes I learn new things, now I know that Mum likes water on her lips when she is on the floor. I look after my Mum by getting her water and tea and always being alert and ready for when the worst can strike.

It hasn’t affected me at school. Sometimes I worry about what is going on at home and that Mum is OK. Then I realise that she will be fine, she’s just at work all day and I can be back home after school and check that’s everything is all right; and usually it’s all right. Sometimes Mum feels a bit tired and has backache.

I have spoken to my teacher at school and it really helps talking about it as it is a problem halved.”

Oliver joins in with Care for the Carers’ fun and games activities that the charity provides as part of its East Sussex Young Carers Service. Oliver explains about being part of the Young Carers Club. “It feels really nice having other people around you who are struggling the same as me. We may struggle more or less but I know there’s still a connection between all of us.

The best club activities are when we are in a team and working together, especially the sports activities. Museums would be nice to go to and to do something for the environment; maybe litter picking or being by the seaside.”

Oliver’s Mum, Wendy, says, “It is the hardest thing of all because as a rule, as a parent, you are the one meant to be looking after them. It’s hard as you may have to swap that role and I feel a lot of guilt about that. It’s tough because being a Mum, you have a lot of guilt anyway. I don’t want to put pressure on Oliver, however I have to prepare him for the worst as well, just so he understands a little bit more. I have to allow Oliver time to talk about it. I’m quite resilient and get on with things, and it’s important that I give Oliver time to talk about how he’s feeling. If I have a bad episode, I might recover quite quickly and Oliver would want to talk about it and how it has made him feel.”

On receiving support from the Young Carers Services, Wendy says; “There can be a stigma around parents not wanting support. It’s not something that people talk about. Children don’t go to school and tell their friends these kind of things at all.”

“It’s really hard to admit that you need help, but I am so glad that I spoke up and said something, because it has now given Oliver more support than I am able to give him. Oliver is excited to have support and he’s not on his own. Children are able to interact with other people who are going through the same thing in a much different way than the support we are able to give as parents.

There are so many different young carer roles. When people think of a young carer, they may think of someone dealing with a severe disability or washing the person they care for.

There is a physical and mental toll of looking after someone and having that responsibility. I definitely think that it’s not just about that physical side of caring, but the responsibility side. It’s a lot for a very young person to take hold of and do on a day-to-day basis. There are no breaks from the responsibility that Oliver has. You can’t control things that might happen, so young carers have to be much more resilient and forgiving. We may have a day out planned, and that doesn’t go to plan because I’m not feeling well. That is really hard, but Oliver is so resilient to that and I am really proud of him.

When people reach out for support, it feels like it may be for physical or respite support. However, the support is so much more varied and helpful. There are opportunities for counselling, talking to other children and they can just be children for the day and not have any responsibilities, which is such a treat.

Even if one person reads this and reaches out for support. I never imagined we’d get as much support as we have, and it’s been really helpful.

Rosie Lowman, Young Carers Services Manager, Care for the Carers, says; “We hope that Oliver’s and Wendy’s story lets other young carers and parents know that support isn’t something to be scared of. Sometimes it’s really daunting to reach out for help. As a charity we provide support as well as fun for young carers.”

We offer support and activities for young carers in East Sussex aged 5-17 years. Please contact us if you would like support or information, and for more details. We also provide a Young Adult Carers (YACs) service for carers aged 16 to 25 years.