For Carers Rights Day on 21st November 2019 and in the run-up to the General Election in December 2019 we are calling upon the Government to prioritise people who looks after a relative, friend or neighbor who could not manage without their help, and to support unpaid carers across East Sussex. Carers Rights Day is a national campaign bringing organisations together to help carers in their local community know their rights.

The Manifesto which was developed with over 7500 carers completing the Carers UK’s State of Caring Survey 2019, is asking for commitment to the following:

“For Carers Rights Day we want to make sure that local carers are aware of their rights and can get the support they’re entitled to. Carers are a vital and often-overlooked group in the community. Every day we hear carers’ stories – they are making enormous sacrifices, often putting their own life and wellbeing on hold to care for a member of their family. Their commitment and dedication can be isolating and all too often caring takes its toll on their physical and mental health, relationships and finances.”

“Our health and social care system is in crisis. Unpaid carers provide care that is valued at £132 billion each year – equivalent to a second NHS. The Carers UK Manifesto sets out key commitments which will enable the Government to do right by carers.

“We are also asking our local MPs to include carers on their election agenda by campaigning for and advocating policies and resources that will help all carers. No one should be left to care alone, yet many carers are not aware of their rights or that support is available. We are already in contact with over 8,000 carers, however we still need to reach thousands more in the East Sussex area.”

“If someone is a looking after a family member or friend and they feel they need support, please do get in touch with us.”

The number of carers in East Sussex has steadily grown to 66,472 so that 1 in 10 people care for someone. The amount of people giving substantial care has risen in the UK with 1.4 million carers now providing over 50 hours of unpaid care per week (1) and 1.2 million carers are estimated to be living in poverty. 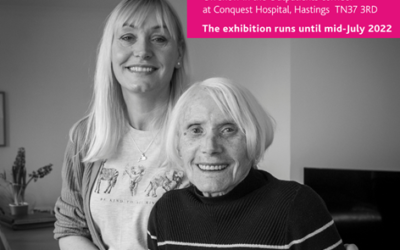 If you are in Hastings or St. Leonard's before the end of July, please go along to the free public exhibition 'Seeing Carers: a carers photography project' along the outpatients corridor of the...

END_OF_DOCUMENT_TOKEN_TO_BE_REPLACED

Guest post by Lily Meyers Lily Meyers is a Freelance writer who primarily focuses on lifestyle and homecare writing. According to Carers UK, there are over 6.5 million people who are unpaid carers...